Breathe In: The Neuroscience of Scent 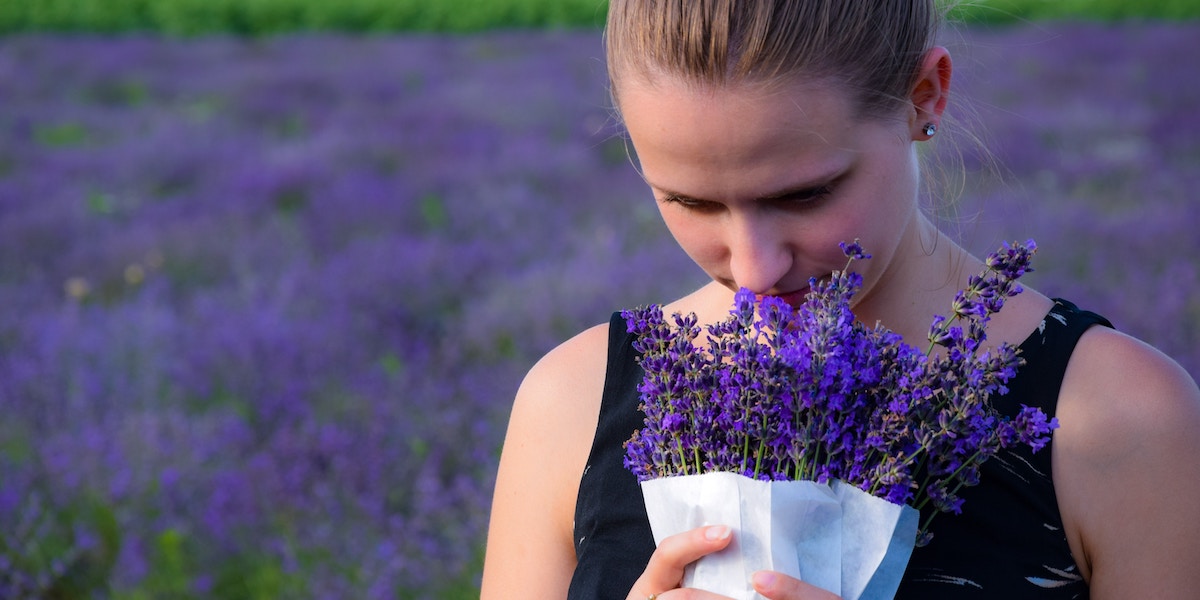 With record rainfall in the US this past month, April showers certainly brought May flowers along with a dazzling bouquet of scents. One of the greatest and most ancient gifts bestowed on humans is the ability to enjoy the perfume of blossoms and a wide variety of other olfactory delights.

Until recently, we thought that humans could sense approximately 10,000 odors. We were shortchanging our schnozzes big time. Actually, we detect about a trillion different smells! This seems overwhelming, but less so considering that most smells are a casserole of many molecules. The smell of chocolate, for example, contains more than 600 chemical components. While odors are seemingly complex, we have our powerful sense of smell to decode them and make sense of the world around us.

How Our Sense of Smell Works

Let’s follow a scent on its journey from the world around us and into our brains. The molecules of an odor interact with olfactory receptors—we have about 400 of them—at the top of the nasal cavity during nasal inhalation or when an odor rises in our mouths. The receptors transmit an odor message to a structure on the bottom side of the cerebral hemispheres called the olfactory bulb. The olfactory bulb processes information about the odor, then sends signals to the olfactory cortex in the temporal lobe of the brain.

Things get really interesting now because the olfactory cortex has direct connections to key brain regions such as the amygdala and hippocampus—structures that play important roles in emotion and memory. Signals delivering visual, auditory, and tactile information never reach these areas in the higher cortex. In effect, our noses provide a direct link between the environment and our central nervous system, unlike any of our other senses.

How We Communicate via Scent

We wear perfumes to attract and please prospective mates while employing repulsive smells to keep pests away. But our bodies also communicate our emotions naturally to each other via scent, often without us realizing it. Functional magnetic resonance imaging of the brains of those sniffing the sweat from first-time parachute jumpers, for example, show activation in the left side of the amygdala—an indication that we are feeling fearful.

Emotions can be contagious, with the “infection” spread via the sense of smell. If we meet up with someone who just witnessed something disgusting, we may pick up a scent that makes us a bit disgusted as well. If someone watches a funny video that makes her happy, you may pick up her olfactory aura and notice an uptick in your own happiness.

Why do people vary so much in their perceptions of smell? Research presented recently in the journal PNAS sheds some light. In a study at Rockefeller University in New York City, 332 participants sniffed from 150 jars of different odors and rated their intensity on a 7-point scale from “extremely weak” to “extremely pleasant.” Blood samples were taken to examine the DNA sequence of each participant. Differences in odor perception often correlated to genetic variation in a single olfactory receptor.

Take a Whiff of Wellness

Pleasant aromas make us happier, but they can do a lot more than that. They can enhance our health. A key reason: many odors are linked to good memories. Based on a review of the clinical literature reported in Brain Sciences, “odors that evoke positive autobiographical memories have the potential to increase positive emotions, decrease negative mood states, disrupt cravings, and reduce physiological indices of stress, including systemic markers of inflammation.” Merely thinking about a pleasant smell can also provide a distraction that reduces pain.

Findings in animal studies help us better understand the potential value of aromatherapies. In a study published in Frontiers in Behavioral Science, exposure to linalool—a type of alcohol found in lavender extracts—reduced the anxiety of mice placed in test environments that would normally be stressful. The vapor’s effect was similar to that of the anti-anxiety agent diazepam, without altering motor activity. Although we can’t extrapolate too much about lavender’s benefits for humans from a mouse study, the possibility that anxiety can be reduced without using a potentially addictive drug warrants further attention. 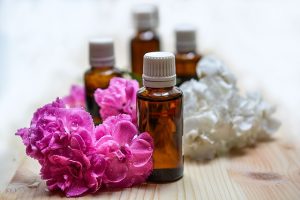 Numerous studies show that aromatherapy can relieve stress in many situations. In one protocol, hospitalized patients experienced significant anxiety reduction prior to hemodialysis by inhaling from a handkerchief with drops of rosewater on it for fifteen to twenty minutes before the procedure. Another study reported reductions in test anxiety in seventh-grade students who inhaled from a handkerchief smeared with oil from the Tuberose, a flowering plant from the lily family.

Inhalation of certain scents may also improve performance on physical tasks. Aromatherapy with peppermint, for example, has been shown to increase running speed, hand grip strength, and number of push-ups. The list of specific scents that promote wellness goes on and on. Jasmine can help us sleep better, vanilla makes it easier to avoid sweets when dieting. Nature is a virtual pharmacopeia!

Indoor environments can be enhanced with scents to impact our mood, productivity and overall well-being. The International Arts + Mind Lab showcased this potential at the Salone del Mobile Milano, an annual exhibition where thought leaders take us into the future of design.

This year, IAM Lab teamed up with Google, Muuto and Reddymade Design to create a series of rooms designed using the principles of neuroaesthetics called A Space for Being. Each room has its own particular alchemy of sights, sounds, textures, and scents. Mandy Aftel, one of the world’s most knowledgeable natural perfumers and author of the award-winning Essence and Alchemy: A Book of Perfume, was commissioned to create different “atmospheres” for the exhibit.

The Power of Scent

In our modern world of electronic devices bombarding us with sights and sounds, it’s easy to underestimate the importance of smell. It may, in fact, be central to our survival as researchers have recently linked a declining sense of smell to higher risk of death and a potential predictor of neurodegenerative disorders like dementia and Parkinson’s disease.

Perhaps we can learn a lesson from the Ongee, a primitive tribe living on Little Andaman Island in the Bay of Bengal. Scent is the primary conceptual framework for the Ongee. They use it as a basis for evaluating time, space and people. As Rachel Herz, a cognitive neuroscientist and one of the world’s leading authorities on the psychology of smell, tells us: “As we Westerners come to understand our sense of smell more and its essential involvement in our lives, we, like the Ongee, will be able to use scent to better understand our world.”