Bringing Harmony to the Brain: The Neuroscience of Music and Parkinson’s Disease 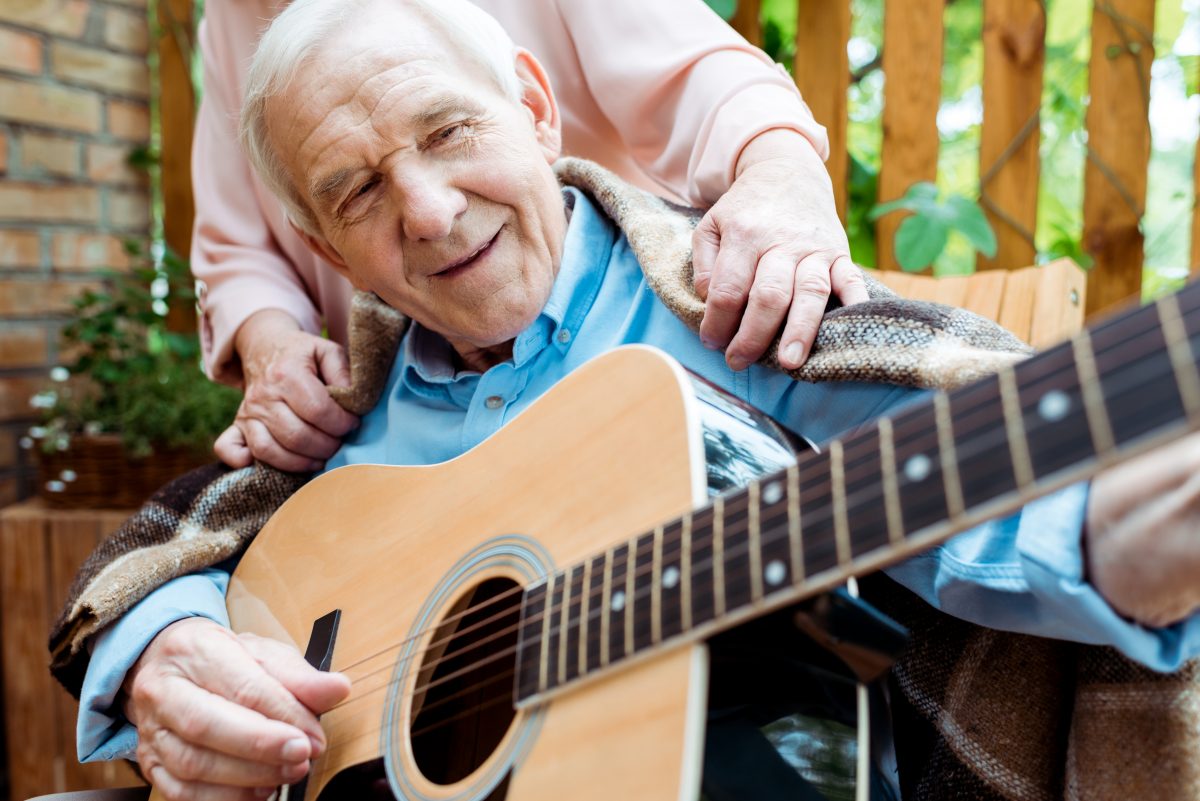 As anyone who has heard “their song” can attest, the right music has the power to make you move. Now healthcare providers are trying to harness this power to help patients with a neurological motor disorder, Parkinson’s disease (PD).

Over the past three decades, researchers have begun to uncover the neural basis of music’s effect on the brain with an eye toward treating diseases like PD. A growing body of research reveals that the influence of music is far-reaching—shaping connections in the brain, improving our senses and movement, and enhancing our mood.

At its core, PD is marked by a host of movement-related problems, including tremor, rigidity of muscles, slowness of movement, and postural instability. The disease can affect the patient’s throat muscles, resulting in softer or slurred speech, as well as the muscles in their limbs. Patients often describe challenges with everyday tasks that require fine motor control, like writing or buttoning their clothing. As the disease progresses, patients may develop a slow, shuffling gait and experience challenges with maintaining their balance. With less mobility and daily autonomy, patients’ quality of life can take a nosedive.

Though PD is most often associated with motor impairment, symptoms related to deficits in mood, behavior, and cognition also surface throughout the course of the disease, further complicating treatment and reducing quality of life for patients. Approximately 40% of PD patients also have anxiety and depression. These mood disorders often develop years before the onset of PD’s motor symptoms, suggesting that they may be part of the disease process as opposed to a response to coping with PD. In addition, PD negatively affects nearly every cognitive function, and patients can experience deficits in attention, verbal fluency, memory, impulse control, and processing speed. Studies tracking the long-term health of PD patients found that nearly all of them eventually develop dementia.

As a neurodegenerative disease, PD symptoms are caused by both the loss of neurons in the brain as well as aberrant activity or connections in the surviving brain cells. The biological hallmark of PD is Lewy bodies, which are abnormal protein build-ups in neurons.

Lewy bodies are often (though not always) coupled with neuron death, most notably of dopamine-producing neurons. Numerous studies in humans and animal subjects have found that the degeneration of dopamine neurons leads to profound, aberrant changes in the neural activity of the basal ganglia, a brain region essential to motor control. In 2005, neurologists Tao Wu and Mark Hallett found that PD patients use more brain activity to perform what would normally be automatic movements in order to compensate for dysfunction of the basal ganglia.

Traditionally, the symptoms of PD are treated with medications that target the dopamine system with the goal of compensating for the patient’s lost dopamine production. However, many nonmotor symptoms of PD, such as cognitive decline, dementia, and attention deficits, do not respond to these conventional medications. Deep brain stimulation is the most common neurosurgical intervention for PD and is believed to compensate for some of the aberrant brain activity caused by the disease.

Unfortunately, these medications and surgeries become increasingly ineffective with extended treatment in most patients. Physical therapy can help patients improve their motor function at least in the short-term, but the benefits typically don’t last more than a couple of months. In order to address PD and all its complexities, healthcare providers are exploring different treatment strategies to complement more traditional pharmacological interventions. 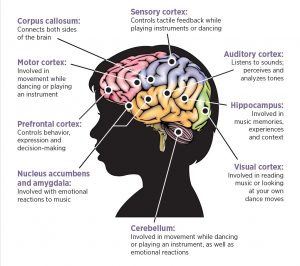 Music touches many areas of the brain. Image: Sound Health at the Kennedy Center

The brain is not a static object. It is malleable and plastic, able to change its connections and activity based on a person’s experience. It turns out that music has a profound ability to mold the brain and its functioning.

Musical training, for example, can change the structure and function of the brain. Musicians of all ages are better at processing auditory information than their non-musician counterparts; they have better perception of speech, enhanced auditory memory, and more consistent brain responses to sounds. Interestingly, both fine motor skills and touch sensitivity are also augmented in musicians probably because music performance engages many different brain areas.

The multifaceted skills required to engage with music— by keeping a rhythm, hitting the correct notes, or coordinating specific body parts, for example—might make it particularly effective in activating and shaping many parts of the brain.

Music therapy may be one promising option that can address many of the underlying mechanisms and symptoms of PD. Therapeutic music performance can improve gross and fine motor skills through a process called rhythmic entrainment, which sets body movements to the beat of music.

In a series of seminal studies, researchers provided a rhythmic beat to PD patients instructed to walk. Normally, PD makes it difficult to produce and maintain rhythmic movement as is required for walking, but the rhythmic auditory cues essentially provided a metronome to help patients sync their steps, leading to improvements in gait speed and cadence. Because the brain’s auditory system is intricately connected with the brain areas important for movement, music may bypass brain circuits that are damaged by PD and activate movement circuits indirectly. By circumventing faulty brain circuits, music may help strengthen or build new brain connections for motor functions, thereby improving movement in PD patients.

A systematic review conducted in 2018 of previous research studies found that rhythmic auditory stimulation improves walking speed and increases the length of each stride in PD patients. Previous studies also indicate that using a rhythmic beat is more effective at improving movement than therapies using other senses, like vision or touch, or using more traditional physical rehabilitation techniques. From these results, the authors recommend “early incorporation of rhythmic auditory cueing for gait performance” in PD patients. In the real world, programs that take advantage of the rhythm of music, such as Dance for PD, have helped improve movement and quality of life for PD patients.

Listening to and producing music has been correlated with increased activity in brain areas involved with reward and emotion, and leads to increased release of dopamine. By naturally increasing the brain’s dopamine levels, music may partially counteract the loss of dopamine neurons from the progression of PD. As an added benefit, because music is intrinsically motivating, music therapy is more effective compared to other perhaps less-rewarding training regimens, like conventional physical therapy.

In addition, music-based therapies often occur in a group setting, which provides a social context that also improves mood and enhances brain plasticity. As Simone Bella, a psychology professor at the University of Montreal, summarized in a paper last year, “Converging evidence shows that music, apart from being an enjoyable activity, is a highly powerful stimulus capable of activating multiple brain networks and showing high potential for supporting or recovering brain functioning, thus enhancing well-being throughout the life span.”

The group music sessions were inherently social, establishing a community for PD patients who may otherwise find themselves isolated and lonely. Allowing PD patients to experience camaraderie and develop social bonds likely benefits their mood and quality of life.

There are still many open questions about how music affects the brain and PD. In an interview with IAM Lab, Pantelyat notes that there are relatively few studies involving large numbers of research subjects that investigate the systematic changes music can have on PD. The studies that have been published “generally lack scientific rigor in terms of clinical studies being appropriately designed and powered to detect meaningful differences,” he says.

But Pantelyat remains optimistic. “I am heartened to say, though, when looking at the [systematic reviews of research] on music and arts-based interventions, that the overall level of evidence for diseases like PD is rising,” says Pantelyat. With a growing body of evidence, music may help bring harmony to the brain and life of patients with Parkinson’s disease.