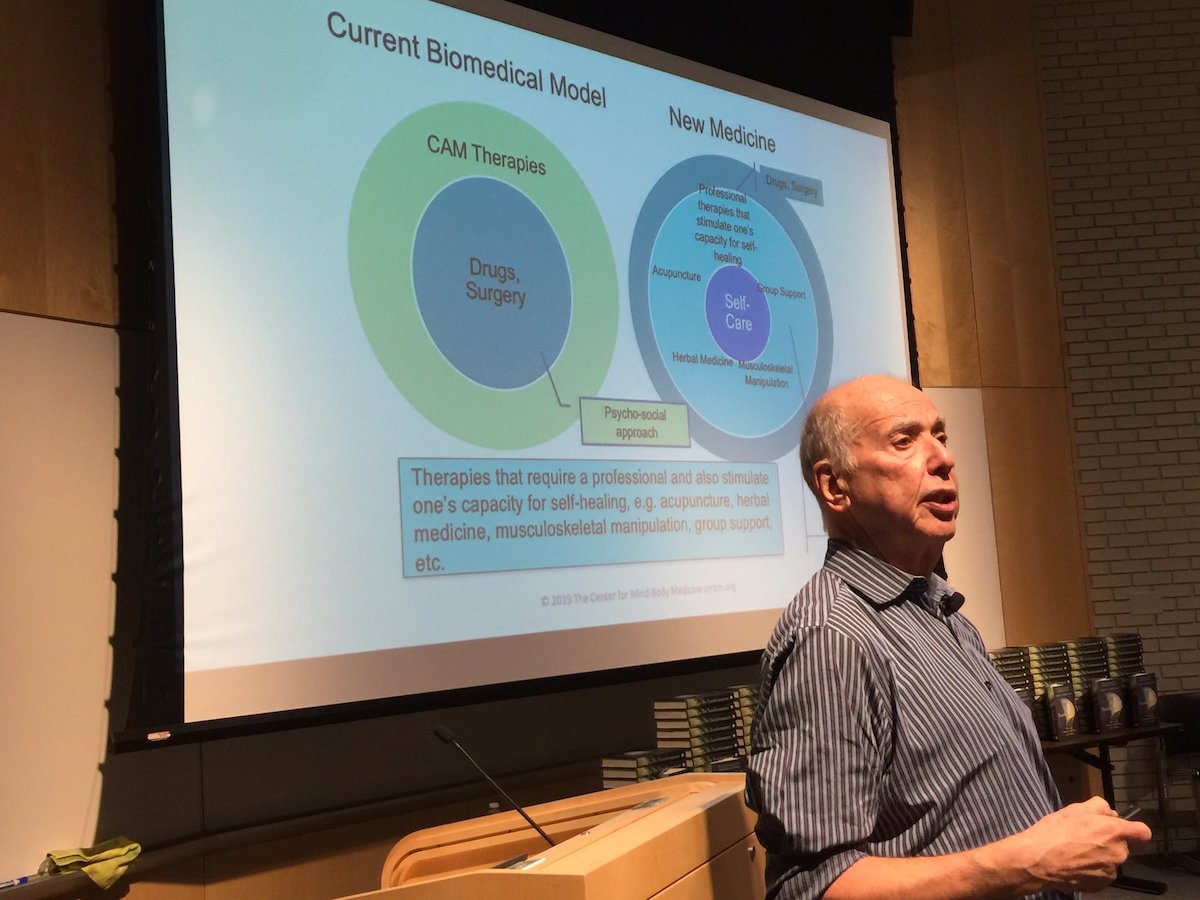 “There are two common and dangerous misconceptions about psychological trauma,” states Dr. James S. Gordon in the introduction to his new book, “The Transformation: Discovering Wholeness and Healing After Trauma.”

“The first is that trauma comes to only some of us…The second is that trauma is an unmitigated disaster, causing permanent emotional crippling, requiring never-ending treatment, severely limiting the lives of those who’ve experienced it.”

Dr. Gordon, a practicing psychiatrist, and the Founder and Executive Director of the Center for Mind-Body Medicine, debunked these and other myths about trauma as the keynote speaker for IAM Lab’s second Dialog Series event, “Addressing Trauma through Immersive Healing Techniques.” During his workshop, he shared more holistic approaches to dealing with the trauma that everyone will face at some point in their lives. (Livestream of the event is available here.)

Gordon recalled founding the Center for Mind-Body Medicine in 1991 with “no money, no paid staff, just a lot of energy and hope.” Under his tenure, the Center has grown to a worldwide team of 160 faculty. The team uses Gordon’s evidence-based approach to healing population-wide psychological trauma with groups as diverse as refugees, veterans, inner-city kids, stressed-out professionals, and indigenous populations.

He emphasized that Western medicine’s current focus on pharmaceutical drugs and surgery—things only a doctor can do or provide—has obscured the general population’s understanding of what we can do for ourselves. While acknowledging the life-saving advances of the past 150 years of medicine, Gordon pointed out that drugs and surgery don’t work in all cases.

“We’re discovering that whether it’s with cancer or heart disease, chronic pain or type two diabetes, depression or anxiety, the promise of these single interventions has just not been fulfilled,” he said.

Instead, Gordon proposed a different model of medicine to the roughly 100 researchers, clinicians and community practitioners in attendance at the event. “The new model puts self-care in the center,” Gordon said. “This is fundamental for living.”

Gordon shared an imperative to move beyond treating symptoms to healing people holistically and equipping them to heal themselves: “It’s about approaching the person as a whole organism and a whole being and helping to balance that person’s whole system so that they can continue the whole process.”

The “powerful medicine” he describes leads with a combination of meditation, exercise, group support, nutritional change and the opportunity to talk, share or process what’s going on.

“We’re aiming to help people not only deal with the trauma—physical, psychological or social—but help them to develop a connection with who they’re meant to be and create harmony with the larger world, the social, natural and spiritual worlds.”

Unlocking Trauma with Meditation and Community

Gordon led the audience in a live, interactive meditation “experiment” to demonstrate simple techniques and benefits of the practice. “Meditation is central to the work we do,” Gordon said. “It is simply relaxed awareness of every moment.”  Participants closed their eyes for a concentration meditation, focused on “soft-belly breathing.” At the end of several minutes of guided meditation, roughly 80 percent of the audience said they felt a change like increased relaxation or a sense of calm.

“If you’re relaxed and present, gradually that dead hand of the past loosens its grip on you,” Gordon said. “Meditation can be the engine that brings you through and beyond trauma. Our mind begins to generalize: if we can make one difference, we can make others.” Because meditation shows us that it is possible to make a difference, it can serve as a starting point for tackling other stressors.

The body’s evolutionary responses to stress are commonly described as fight, flight or freeze. Although we are less likely to be chased by a lion in modern times, our bodies still react in highly protective and evolutionarily primitive ways. We still treat varying degrees of trauma—like the end of a long-term relationship—as life-threatening. “The problem is not the immediate response,” said Gordon. “The problem is if it continues for weeks, months, years.”

The key to “unlocking” the trauma is to process and release it. For many people, that takes more than talking.

To illustrate this point, Gordon shared a story about working with a group of nursing students in Haiti a year after the devastating earthquake of 2010. Ninety nurses had died in a building collapse, and the students had never dealt with their trauma, feeling they needed to “be strong” for those around them.

Gordon led them in an expressive meditation practice—shaking and dancing to music—to move not just their bodies, but their “stuck” emotions. Within two minutes, half of them were weeping. Eventually, their tears turned into laughter. It was the first time they had done either since the earthquake.

Gordon recalled one of the students saying, “We’re Haitian girls. We haven’t danced in a year and now we’re dancing.”

It was just one of many examples Gordon shared showing the power of group support, how one person’s opening or revelation can pave the way for others to do the same.

“The single most important intervention for people who are traumatized is social support,” he said.

Baltimore City Councilman Zeke Cohen also shared remarks at the event. Cohen described how a 2019 shooting at Frederick Douglass High School spurred him to action to address the painfully common traumatic experiences endemic to many Baltimore neighborhoods. On that day in February, a shooter entered the school and shot school staff within view of students. Within moments, the one space students felt safe in their neighborhood became a violent crime scene. Student testimonies at a subsequent City Council hearing challenged city leaders to do more.

“In most places in the United States, we would consider that a school shooting, and there would be a very significant response,” Cohen said. “But I’m assuming most of the people in this room don’t even know it happened.”

In response, Cohen has introduced the Trauma Responsive Care Act to set cross-sector goals for reducing trauma. If passed, the new law would put in place training, resources and policies to ensure that all city frontline staff who interact with children and families are trained with trauma-informed approaches.

Gordon, who has worked with school shooting survivors from Parkland and Sandy Hook offered advice to Cohen rooted in his commitment to self-care.

“You’re not there to fix them,” he said. “Be there with them. Share with them approaches and techniques they can use for themselves.”

A livestream of the event is available here.

About The Dialog Series
The monthly Dialog Series at the International Arts + Mind Lab invites today’s thought leaders from the arts, sciences, and technology to share their unique lens on how the arts are essential to our health, well-being, and learning.  You can read about our previous Dialogue guest, the singer/songwriter turned public health researcher Tasha Golden, here. Our next guest, Sara Kass, MD, will share arts-based approaches to address PTSD and traumatic brain injury amongst military service members and veterans. Dr. Kass is a military and medical advisor to Creative Forces: The National Endowment for the Arts (NEA) Military Healing Arts Network.