The healing power of music for mental health has been formally studied across many professions – from psychology to music therapy to nursing – dating back to the 1940s. A recent global scoping review evaluated published research on music-related interventions for serious mental health issues and underscored the therapeutic potential of music to support mental health.

“As far as we know, it’s the first scoping review to examine intersections of music and [serious mental illness] at this scale,” said Dr. Tasha Golden, a senior researcher at IAM Lab and lead author of the study. “It also offers five recommendations that, although they’re tailored for studies of music’s effects on mental health, could be applied to any studies of health interventions that involve music and the arts in general.”

Mental and substance use disorders are the leading cause of disability in the world and can affect up to one in every three people in their lifetime. Despite the prevalence of mental health disorders and its costs to health and society, resources and treatment options often are not consistently available or effective. The study focused on serious mental illnesses, where the healthcare burdens and cost are greatest.

For over half a century, music has been formally used and studied as a way to support and promote mental health. Research studies investigating the use of music as a mental health intervention began in 1946 and have rapidly increased in frequency since 2005. 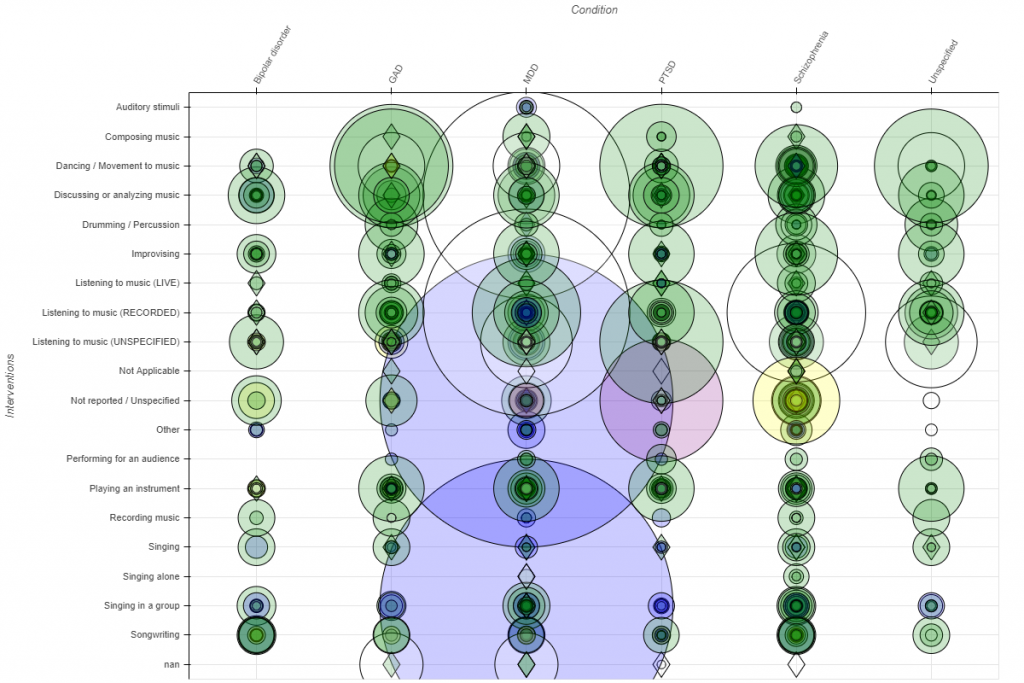 To understand the types and extent of these studies, the researchers combed through eight databases and identified 349 qualifying studies for analysis. Over two-thirds of the primary studies (68.5%) reported that music-related activities had a positive effect for the patients.

These results show “how much research has been done at the intersection of music and mental health, and underlines the promise of music as a support for mental health,” Dr. Golden said.

Of the serious mental illnesses, schizophrenia was the most studied, followed by major depressive disorder and post-traumatic stress disorder. The majority of studies (57.0%) focused on psychiatric outcomes, followed by emotional (37.3%) and social functioning (26.1%).

Researchers did document a diversity of ways music has been used in treatment. Listening to recorded music was the most widely-reported activity (15.3%) but some studies lacked the details needed to understand and classify how the interventions were carried out.

“What we’ve realized in this study is that the extensive time, funds, and expertise being invested in this field will see limited returns until the people involved take the necessary steps to ensure their findings can be understood in the context of other studies and practices,” Dr. Golden said.

Based on these findings, the researchers made recommendations on how to improve future studies and ultimately advance the field. One step is to standardize how and what evidence is reported; the new scoping review can be used to help determine what guidelines are the most useful and effective. Future studies should also acknowledge the complexity of music interventions and develop core measures for studying how they affect mental health.

Finally, the field should develop more specific classifications and definitions for different music-related activities that fall under the broad umbrella of “music.”

“As a musician myself who’s developed arts-based interventions, I’ll say that I also hope that in some way this article helps researchers, practitioners, and arts facilitators realize how much their insights and detail decisions matter — even the seemingly small ones,” Dr. Golden said. “Documenting them could be of great benefit to the field.”