The Psychology of Aesthetics, Creativity and the Arts 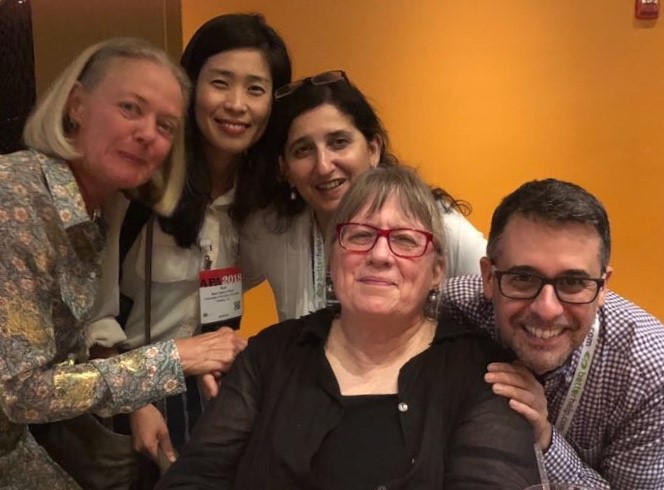 Mary Gregerson is a clinical psychologist, scientific researcher and specialist in environmental health psychology and performance psychology. She originated the intervention techniques of partnering and lifestyle balancing. Mary is currently the president of The Society for the Psychology of Aesthetics, Creativity and the Arts, Division 10 of the American Psychological Association (APA). Dr. Gregerson is licensed in Missouri and Virginia and is president of Heartlandia Psychology. She is the editor of “The Cinematic Mirror for Psychology and Life Coaching” (Springer Science + Media, 2009) and “Technology Innovations for Behavioral Education” (Springer, Science + Media, 2011), and co-editor of “Teaching Creatively and Teaching Creativity” (Springer Science + Media, 2012). IAM Lab spoke to Dr. Gregerson on the eve of the 126th Annual Convention of the American Psychological Association in San Francisco, CA.

IAM Lab: What brought you to the Society for the Psychology of Aesthetics, Creativity and the Arts?

MG: I have always been artistic. I danced when I was young, and I painted a lot. Now as a fiber artist, I knit and crochet, among other things, When I lived in Washington, D.C., for 25 years I served as a volunteer monitor for many studio arts programs through the Smithsonian Resident Associates. I would help teachers administer studio arts programs and help students learn new skills. For instance, I learned floor cloth painting as well as Chinese watercolor painting and calligraphy. I also fell in love with film appreciation by monitoring a Smithsonian film “boot camp” course. I went from thinking American Beauty was one of the worst movies I’d ever seen—too nihilistic and dark for my taste—to one of the best because of the dramaturgy approach to film appreciation the facilitator used. All of the sudden I understood the characters’ “signature,” or primary symbolism, and it opened up the whole film for me. I wanted to bottle that feeling of discovery through the arts and make it available to everyone else.

Through my private practice I learned that there was often a bit of a cultural stigma around creative pursuits. I specialize in performance psychology, where I work with anyone not achieving her/his self-defined goals in life. I kept encountering people who were ignoring or marginalizing their creative talents or desires because of practical reasons. Many of these performance psychology clients were artists who needed to identify the barriers to their success in creative fields—and break through them. When they could finally be honest about what they really wanted to do with their lives, like becoming a professional dulcimer player or opening a chain of photography boutiques, I would see their eyes light up. I’d see the whole person for the first time as this inner need they had neglected finally emerged. And, I understand personally that fulfilled feeling. Unless I have some sort of artistic expression going on in my life, I am not a totally happy camper. I always ask my clients, what value is this life you’re living if it’s not fanning your inner passion?

I really became a champion of the arts when after 9/11/01 I was drafted to work as a Local Disaster Volunteer by the American Red Cross at the Pentagon crash site. A month later in Washington, D.C., we had the anthrax scare, and then the spring floods and hurricanes Katrina and Rita, and in October, the long sniper siege. People in the D.C. area experienced trauma after trauma. And everyone who was coming to see me had this layer of trauma, so I went to a week-long trauma treatment training called The Therapeutic Spiral technique. There I discovered that I had secondary PTSD from the work I’d done at the Pentagon coupled with the disaster-laden world in which I lived and practiced. I had managed to escape with only one element of PTSD—flashbacks, but no emotional upheaval nor work interference. Through this Continuing Education training, I came to believe that my many creative outlets had buffered my response to typically traumatizing experiences by helping to process/integrate my traumatic responses and put them behind me. But as I looked into the science behind creative arts treatment for trauma and for trauma prevention, I found empirical evidence to be very limited. We had tons of clinical evidence that creative arts were a great intervention for people dealing with trauma, but no real scientific evidence, few clinical trials and little understanding of mechanisms of effectiveness or of matching creative art with particular person.  How did creative art ameliorate trauma?  For whom did which art work best, or not work at all?

When I moved back to Kansas, I began specializing in military families after receiving certification in deployment psychology. I began offering active duty military and their families a range of techniques and approaches, including standard cognitive behavioral approaches like prolonged exposure and systematic desensitization, and innovative approaches like creative arts therapy, and practically everyone chose the latter. I had whole families coloring together and then using the pictures to communicate with each other. It was remarkable.

So, I revisited the scientific evidence on a continual basis, and I decided I needed to do more. I laid down the gauntlet for researchers in a 2007 article (“Creativity Enhances Practitioners’ Resiliency and Effectiveness After a Hometown Disaster“). I asked:  Where is the scientific evidence? How does this work, and which arts work with which people? I joined Division 10 and was elected council representative to the APA Council of Representatives after a couple of years. Then I was elected president. I decided to champion creative arts treatment for trauma as my presidential initiative.

IAM Lab: How did you approach creating the Division 10 program for the 2018 APA convention? What were your overall goals?

MG: It may sound basic, but we started with figuring out what we wanted psychologists to know. In creative arts therapies (CATs), it starts and ends with psychology. There’s something disturbing the person causing them to seek therapy the outset of CATs intervention, and we use psychological measures and techniques to identify that. A general framework is “cognitive, affect and behavior” (what we think, feel and do). Then, to show clients are getting better, we monitor psychological outcomes again, with psychology indicating when therapy was over. So, we needed to marry the best of psychology with creative arts therapy.

How to do that? When I was a post doc at Harvard University and Harvard Medical School, I created a conceptual framework that would help us understand all the different things in a person’s life that could affect them. It’s a positive psychology approach steeped in Jungian analysis called Synchronous Systems. When I began contouring the program proposals for the APA convention this year, I used my model to frame the scope, both breadth and depth. For breadth, we proposed to describe what’s going on inside a person—their physiology and their psychology—as well as what’s going on outside a person—their physical and social environments. If you use all of these different dimensions to design research, you are automatically controlling for many of the things that can contaminate your findings. I wanted to make sure we had programs that looked at each of these four systems of living, and how they related to each other. For depth, we turned to neuroscience.

IAM Lab: You expanded programming devoted to creative and expressive arts therapy this year. How did that happen?

MG: I was inspired by Creative Forces: The National Endowment for the Arts (NEA) Military Healing Arts Network. They work with service members who have been diagnosed with traumatic brain injuries and other psychological conditions to provide an amazing array of creative arts therapies. Creative Forces is really leading the charge to strengthen the scientific evidence base by building a research agenda, so we worked together toward the same ends.

The APA convention proposal process is incredibly competitive. There are probably 10 times the number of proposals as slots. I figured if we wanted 2-3 programs to be accepted, we should submit about 20 proposals. So, I sent out messages through our various APA listservs asking: Are you doing anything with creative arts therapies? Are you interested in creativity? And the content and contacts I received in return were astounding. The NEA put in two proposals (one on Aging and one on Autism) and we submitted another 16 from among our APA members. In the end, 16 (including both from the NEA) were accepted as proposed, which is so remarkable and speaks to the quality of the work happening in the field of creative and expressive arts therapies. The two rejected proposals were transformed into other formats like posters and papers so that virtually every program was presented at APA 2018.

Because of the overwhelming number of programs accepted, I set aside my other volunteer contributions and took a leave of absence from my other business to make good on the promises of the proposals. There are more than 150 people involved in these programs. We had a well-rounded group of programs that looked at the profession, looked at the phenomenon of creative expression, looked at mechanisms of effectiveness and looked at groups indicated or contraindicated for particular CATs.

And, different Divisions across APA were interested in giving their coveted hours to hear what these people working in and investigating creative arts had to say. It made the impact of our program bigger because it’s something other people besides Division 10 members find interesting, too.  We have added almost 100 new members this year. That is a 33 percent increase for us, which is great.

IAM Lab: What’s next for Division 10?

Our horizon is neuroscience. We’re going to be able to show the woman on the street, the man on the street, that creative arts produce such healthy functioning and processing that they are essential to living a healthy and satisfied life even as adults. So instead of the arts being the first thing that gets cut from the curriculum in schools when tightening their belts, it will be the last thing because they’ll know how essential it is to health and well-being.

I insist that we meet certain standards on this professional journey. Science in collaboration with art ends up creating the best creativity-based therapeutic approaches. We’re starting to understand mechanisms now, and we’re starting to admit there is some effectiveness, so now we’re looking at matching techniques with people. Division 10 Immediate Past President Paul Silvia, Mathias Benedek, and their colleagues published an article on creativity earlier this year that identifies a brain processing “profile” of divergent thinking that is associated with creativity processing. That is the first step. We know what brain activity looks like when healthy people are being creative. Can we now work to strengthen that processing profile and those neural circuits in people who have been injured or experienced trauma? We can find out by applying this healthy baseline. Are there signature brain processing profiles associated with the signature wounds of modern wars, that is, post-traumatic symptoms and traumatic brain injury? If so, are these the compromised profiles that the creative arts therapies fundamentally change? Psychophysiological coherence, or whole brain processing, is now commonly accepted; one of our 2018 presenters, art therapist Katherine Parker, calls it a “whole brainer.”

A vision that creativity can engage areas of the brain that can’t be reached through talk therapy is what is driving me to champion creative arts approaches in the practice and profession of psychology. This is not a guild issue for psychologists, but, rather, an issue of best serving our clientele and our culture. We know that creativity brings together systems that often work in opposition to each other. Creative arts are incredibly powerful as well as incredibly accessible if we only give ourselves permission to be creative as adults, and neuroscience is at the center so we may understand and cultivate creative arts as essential for healthy, satisfying living.