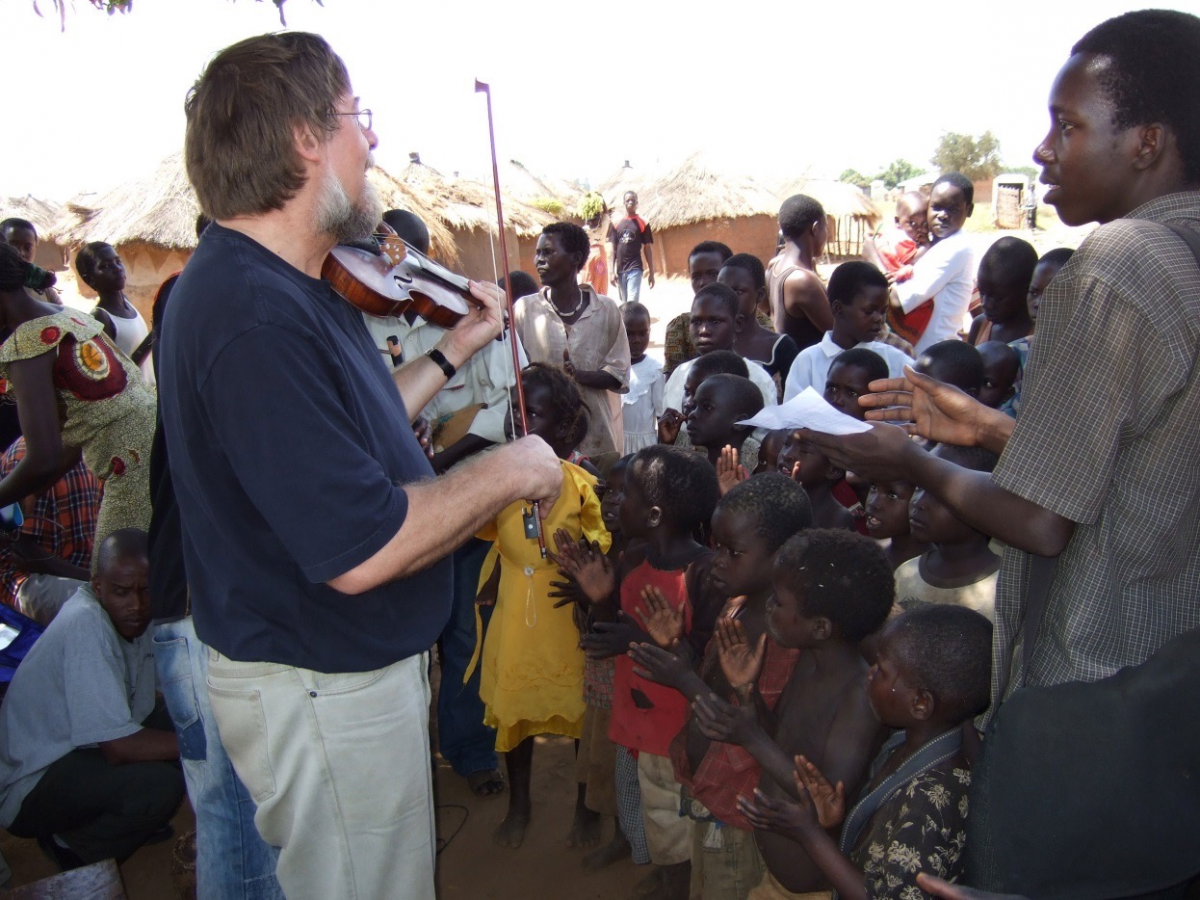 Fear courses through your blood as the sounds of sniper shots surround you; the buildings you once recognized as your neighborhood are reduced to rubble on the ground. The destruction traumatizes you and your family; your children struggle to find the words to describe their feelings and regularly wake up from nightmares.

One day, an unassuming man with a big smile walks through your neighborhood. A few minutes later, you hear something unexpected: music accompanied by children’s laughter.

Nigel Osborne, a world-renowned composer, musician, and professor, has arrived.

A Calling to Help and Heal with Music 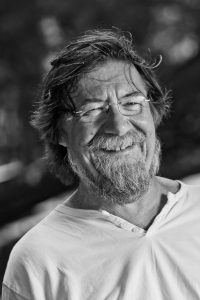 Nigel Osborne has enjoyed a prolific career as a composer and violinist. His works have been performed by world-renowned orchestras and opera houses, including the Vienna Symphony Orchestra and the Royal Opera. He also served as the Reed Professor of Music at the University of Edinburgh. But it was during his time as an aid worker during the Bosnia Civil War, that he discovered his musical gifts could be used as tools for healing.

Osborne witnessed firsthand the toll the conflict had on the people living in the region. Of the 200,000 people killed during the Bosnian War, 12,000 were children. As political attempts to stop this genocide failed, Osborne decided that he needed to do something to help the thousands of traumatized children who were left homeless, had lost family members, or were orphaned as a result of the conflict.

During his college years at Oxford University, Osborne studied music and explored his longstanding interest in neuropsychology. At the time, there was no formal coursework or professional specialization in music therapy readily available so Osborne chose to supplement his music degree by enrolling in a nursing program. Drawing from his mixed background, Osborne felt that he could use music specifically to help the children of the Bosnian conflict.

A Music Program Dedicated to Children

Osborne began setting up programs using music to help the children gain self-respect, express themselves, and show respect to others. He soon saw traumatized children reacting positively to his music programs in very visible ways.

“This went rather well,” Osborne said. “I’ve seen, over and over again, groups of deeply troubled, traumatized children start running around and laughing their heads off within 5 minutes of starting a session.”

The Ministry of Health in Sarajevo evaluated his program and told Osborne to scale the program up. At one point, Osborne’s team reached 3,000 children a week. In 2007, he was awarded the Freedom Prize of the Peace Institute in Sarajevo for his work.

In an interview with IAM Lab, Osborne emphasized that what he provides to “his children” is therapeutic music, not clinical music therapy. Therapeutic music is a way to reach “masses of children,” he explained, whereas clinical therapy in research settings may only help a small number of children at a time.

But it’s often the individual cases that provide the most powerful examples of the program’s impact. Osborne shared a recent breakthrough with an elective-mute Sri Lankan boy in Chennai, India. After the boy’s traumatic experiences, he stopped speaking altogether. But Osborne’s therapeutic music sessions helped the boy come out of his shell.

“During the course of our session, for the first time, he started singing words. The staff of the center collapsed in tears,” said Osborne. He also emphasized the importance of slow and gradual changes that occur over a longer time period. “Those are often more important.”

The Moral Dilemma of Treating Versus Testing

Those “slow changes” can indicate physiological and psychological responses to music programming. Osborne is interested in the biological underpinnings of the responses to his programs but says he avoids taking measurements of the children. “We try as hard as we can to avoid being invasive,” Osborne said. “We have another job, which is supporting the children and earning their trust; we’re not just there for the sake of taking their data.”

Osborne chooses to arrive in the camps by foot or by local taxi, and not in “some fancy 4-wheel drive in a white jacket. You earn trust by letting people identify with you,” he said.

While Osborne does feel the need to provide scientific research data to back up his programs, he feels strongly that he cannot run an experiment with randomized control trials in a camp. To do that “would be immoral.” Instead, he “put[s] the ends together” by synthesizing existing scientific literature with his experiences in the camps.

Osborne provided examples of tangible improvements in the children following his music programs; certain music is able to lower heart rate, a vital advantage to children experiencing a stress response. He has also observed that music can improve breathing regulation in traumatized children because musical rhythm is highly interactive. Singing is a “wonderful exercise of the lungs,” he explained.

In addition, Osborne has noted that trauma affects the children’s movement, making them either hyperactive or very sluggish. His music programs are able to normalize the children’s movements. “We help children that are hyperactive by going to their level, then gradually slow down to a normal rhythm,” said Osborne. “We work with children that are sluggish by playing the least obliging of rhythmic structures and then gradually get them moving.”

Osborne has written eight publications, some of which describe his biopsychosocial approach to therapeutic music. In these articles, he argues that music has the ability to tap into every aspect of the human condition: biology, individual psychology, and social interactions.

Music Heard ‘Round the World

Since setting up his initial program in the Balkans, Osborne has traveled to Syria, Lebanon, Palestine, Uganda, Myanmar, Croatia, and India to work with traumatized children. Osborne explained that depending on where he is in the world, the children have different preferences for what type of music he plays.

He structures his programs based on their requests. For example, in Palestine, “the children [are] thirsty for the world,” so Osborne plays pieces ranging from rock and roll to traditional music.

With Syrian children living in Lebanon refugee camps, he noted, “They are not home. They can see the mountains of Damascus out of the flaps of their tents, but they cannot return. They long for it.” He, therefore, relies almost exclusively on Arabic songs to provide the feeling of home.

Osborne also finds and recruits musicians within the refugee communities to run these therapeutic music programs with him. He pays them, which allows the musicians to contribute to the economy, while also boosting their self-confidence. “I recruit some very nice musicians and they work beautifully for me,” said Osborne.

During a phone interview with IAM Lab, Osborne was in a hotel in Northern Croatia, about to embark on a journey to Beirut, Lebanon, where a group of Syrian refugee children will perform in a project entitled “Peace Train”. Before the Syrian Civil War, there was a railway in Syria that serviced much of the population. It is now destroyed.

“With the Peace Train project, we will take an imaginary journey around the different regions of Syria, which have their own distinct musical repertoires,” said Osborne. “We’ll then sing Peace Train by Cat Stevens.”

When he returns from Beirut, Osborne will then head to Istria in the Balkans, where he has run summer camps for children ever since the Bosnian War. He has a team there that has been working with him for 25 years. “We’re still together, so that makes me think we’re doing something right,” he said.

Osborne’s love for his work is palpable. His care and devotion to his children present themselves in the most humbling of ways when he speaks. He emphasized how lucky he feels to be able to do this work: “It doesn’t come on a plate. You have to make it happen. It’s not a job you can apply for, but it’s a thing you can certainly do.”

Written and reported by IAM Lab Intern Melanie Ambler. Melanie, a cellist and recent graduate of Brown University with a degree in Neurobiology, has a passion for the intersection of music and medicine.