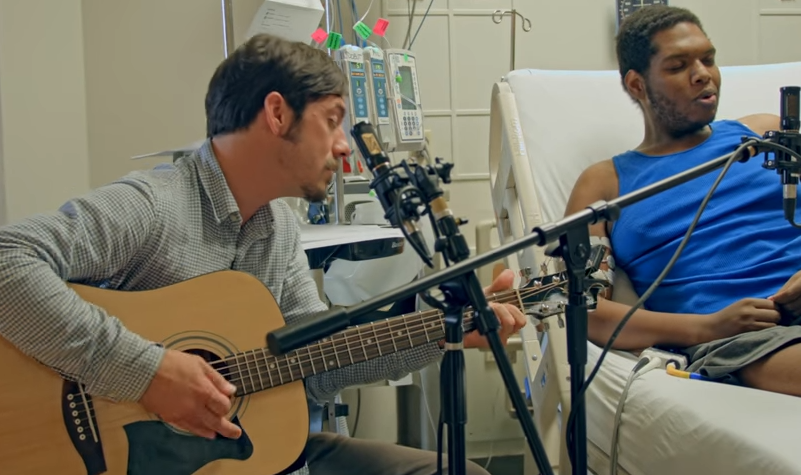 Jamal Davis, a young singer-songwriter, always dreamed of pursuing a career in music. Jamal was working to get an audition for The Voice when he found himself in need of a heart transplant for his congenitally enlarged heart. Jamal went to the University of Florida (UF) Health Shands Hospital, where his nurses enlisted him in the Arts in Medicine Program (AIM) when they realized how much he liked to sing.

Through AIM, Jamal developed a relationship with Artist in Residence Ricky Kendall, another musician. Ricky would come to Jamal’s hospital room to sing all of Jamal’s favorite songs with him. They also made a Tiny Bed Sessions video, which are inspired by the Tiny Desk Concert series on NPR. Rather than having to step out of his life and wait on a heart transplant, Jamal was able to continue doing what he loved, singing, while creatively collaborating with a like-minded artist. Videos of Jamal on vocals and Ricky accompanying him on guitar reached both the creator of the Tiny Desk Concert series for NPR Music, Bob Boilen, and Ryan Seacrest. Eventually, Seacrest coordinated a surprise visit for Jamal with his music idol, Tori Kelly. Jamal’s life could have been put on hold, waiting for a new heart, but through the UF Health Shands Arts in Medicine program, his career evolved even during his hospital stay.

“This is representative of what it can look like on a daily basis when a patient has a beautiful, enjoyable, creative experience,” says Director of the UF Center for Arts in Medicine and Assistant Director of UF Health Shands Arts in Medicine, Jill Sonke. “Having the arts available in hospitals can help people move forward.”

The AIM program began in 1990 with two volunteer visual artists in the Bone Marrow Transplant Unit at Shands Hospital and has expanded to include 20 artists in six buildings throughout the UF Health System. Jill Sonke, along with Dr. Rusti Brandman from the UF dance department and Dr. John Graham-Pole, a pediatric oncologist, co-founded the Center for Arts in Medicine in 1996 to conduct research and educate the growing field. AIM includes visual, literary and performing arts opportunities to encompass the range of conditions present at UF Health. The goal of the Arts in Medicine program is to foster communication, expression and build a sense of control while inspiring patients at the hospital.

Though Sonke has a background in dance, she was always interested in medicine. In 1994, she joined the dance faculty at UF and started working as an Artist in Residence at the AIM program. Sonke would dance in patients’ rooms and run classes for patients, including those with breast cancer and Parkinson’s disease (PD). According to Sonke, her practice “shifted from the bedside to the community over time,” and students quickly began expressing interest in the program. Within months of serving as both an Artist in Residence and a dance instructor, Sonke was leading students in independent studies, and in 1999, the Center introduced its first certificate, the undergraduate Certificate in Dance in Medicine. The Center now offers three undergraduate certificates, two graduate certificates and an M.A. in Arts in Medicine.

“There was a definite parallel between my clinical practice and academic coursework,” says Sonke. Initially, Sonke taught and did research at UF while Arts in Medicine was still a very small center. As AIM began to incorporate academics, she transitioned into that role as well. “It was a huge advantage to not be funded [at first],” says Sonke. “I was given a wide-open space to build my own structure. This created a culture for the center in which we were very self-sufficient and entrepreneurial.”

The collaboration between artists and healthcare practitioners fostered innovative programs. One such community-based program, Sing for Life, engages patients with Parkinson’s disease with music to improve both motor skills and develop connections with others. Phillip Dmitriev, a former volunteer for Sing for Life, saw the program as “an opportunity to both learn and help others at the same time.”

Over the last year, five volunteers and two professors in music worked with six patients in the program. Singing sessions occurred weekly and generally began informally with the volunteers and patients talking about what they have been up to, laughing and bonding. Following the introductory phase of the session, Dmitriev said they “would warm-up, and sing some songs – typically of an older era, or some common ones everyone knows. In between songs, Dr. Smith and Mr. B would point everyone in the right direction in terms of tone, etc. After singing a song all together, we would also take turns singing in pairs, men and women, individually, and so on. So really the environment was very inclusive and welcoming.”

Indeed, these musical interactions seem to improve the patients’ quality of life from both psychological and physiological perspectives. On one hand, the regular social interactions between patients, volunteers and coordinators establishes an inviting atmosphere, conducive to emotional well-being. In addition, many patients’ vocal skills significantly advanced between their early and later sessions. These individuals noticed the increased vocal clarity, pitch control and independence when reciting a solo – factors that contributed to their overall happiness levels. About watching patients with PD develop these perceptible skills, Dmitriev said, “I think that is one of the great advantages of art: at the end of your hard work, you have a tangible product.”

Today, the Center for Arts in Medicine encompasses a large faculty and staff, research assistants, graduate and undergraduate students and volunteers with the common goal of improving patient care through the arts. Together, this team is moving the field forward, asking unanswered questions and making new connections between the arts and medicine every day.

This article was written and reported by IAM Lab contributing blogger Michelle Sheena.