Our society’s rapid pace of life and addiction to digital technology have created a stress epidemic in the 21st century. But there may be another major contributing factor: chronic nature deprivation.

Our connection to nature has become very tenuous. More than half the world’s population currently lives in cities, a number that is predicted to swell to 68% by 2050. Meanwhile, the average American now spends about 93% of the day indoors. This limited contact with green space has long-term consequences.

According to a study involving more than 900,000 people in Denmark published this year, children growing up in environments with the lowest levels of green space had a 55% greater risk of developing psychiatric disorders as adults.

Researchers are exploring this crucial link between nature and mental health and finding that when it comes to our well-being, mother nature often knows best.

Nature on the Mind

People who feel more connected to nature tend to be happier and report greater life satisfaction. As designer Ingrid Fetell Lee notes in her book, Joyful, “for most of human evolution—eighty thousand generations—nature was not a place we went but a place we lived.” We feel innately at home in nature.

Biologist E.O Wilson coined the term ‘biophilia’ to describe the inherent attraction we humans have toward living things. He theorizes that our early ancestors evolved to take a particular interest in natural phenomena as they represented opportunities (food) or threats (predators) to survival. Today, biophilia is encoded in our DNA, but our interest in nature is less about day-to-day survival and more centered on pleasure. And yet, exposure to nature may be essential to our longevity in the 21st century, particularly when it comes to our mental health and well-being.

Here are some of the mental health benefits of spending time in nature:

Exposure to nature reduces levels of the stress hormone cortisol. And it doesn’t require much time in nature to feel its effects. In a Japanese study, just 15 minutes of walking in the forest reduced cortisol levels by 16%. In another study, Finnish people who walked as little as 20 minutes through an urban park or woodland felt much less stressed compared with another group who walked through a city center.

Nature can also help us bounce back after a stressful experience. In a classic 1991 study, participants watched a stress-inducing movie (about the prevention of workplace accidents) and were then divided into two groups. One group watched videos of nature scenes (such as trees, fast-moving streams), while the other watched videos of an urban setting (like commercial street traffic, pedestrians, shopping). Participant self-assessments and measurements of heart rate and muscle tension showed that the group that watched the nature scenes recovered faster from the stressful video than those who watched videos of city scenes.

Even brief exposure to nature can reduce feelings of depression. In a study reported in the Journal of Affective Disorders, subjects diagnosed with Major Depressive Disorder (MDD) experienced greater improvements in positive emotion after a 50-minute walk in a nature park compared to those walking for the same duration in an urban location.

Other research published in the Proceedings of the National Academy of Sciences showed that 90 minutes of walking in a natural setting significantly reduces rumination—repetitive thought which tends to sustain and worsen feelings of depression—compared to walking in an urban setting. The nature walkers had significantly less activation of the subgenual prefrontal cortex—an area of the brain that typically has heightened activity during sadness, avoidance of social contact, and negative self-reflection. Less activity in this region may give the mind a break from brooding and a boost to one’s overall mood.

How Nature Gives Our Brains a Rest 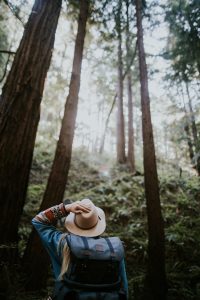 How does a walk in the park help our mental well-being?  According to the Attention Restoration Theory, nature refreshes our minds by keeping us in the present.

Planning, managing, and taking care of daily tasks can become very stressful if we do not take the occasional break. Out in nature, we can allow our minds to drift without the pressure of having to make immediate decisions or solve problems. Even indirect exposure to nature, like looking at photos of landscapes, may reduce impulsive decision-making.

This natural retreat from the daily grind helps restore us to a state of mind where we can think more clearly and calmly by altering our brain activity. When we encounter natural environments, our brain increases alpha waves associated with relaxation and reduces midline theta activity in the frontal cortex prevalent during active problem-solving.

These findings and imaging of other brain regions support the contention that nature exposure gives us a restorative mood boost by promoting relaxation and increasing positive emotions. Nature simultaneously calms us down and cheers us up.

Communing with nature is taken very seriously in some countries. South Korea, for example, has designated “healing forests” where specially trained healing instructors provide therapeutic services on site. The Korean Forest Service runs a variety of programs ranging from a “happy train” that transports children who have been bullied into the woods for restorative camping to ones that help firefighters bond to overcome PTSD.

Not surprisingly, spending time with the trees can help overcome the stress associated with technology obsession. Two South Korean studies found that two-day trips to the forest lowered cortisol levels and significantly improved self-esteem in eleven- and twelve-year-olds who were characterized as borderline technology addicts.

Because of nature’s health benefits for the mind and body, doctors in Scotland are literally prescribing nature to their patients as a part of an overall treatment strategy. The first of its kind in the United Kingdom, the Nature Prescriptions program also provides patients a calendar of nature-related activities of things to do or see in the great Scottish outdoors.

The United States is also following suit: A hot new trend in nature experiences is “forest bathing.” It’s not a literal bath in water, but rather total immersion in a forest environment. This activity originated in Japan and has been promoted by the nation’s forestry ministry since 1982. The goal of this practice is to awaken your senses by opening up to the restorative sounds, sights, scents, and feel of nature around you.

Moving Forward to Get Back to Nature

The evidence is clear: nature is good for our mental health. But to fully tap into the power of nature, we collectively as a society and individually as agents of our own well-being need to put more effort into taking advantage of the outdoors.

More research is also required to better prescribe nature to individual patients. For example, individual responses might vary by different types of nature exposure and different “doses” of nature may be required to achieve beneficial effects on mental health.

And then, there is the question of how to reconcile our biophilia with an increasingly urban environment. As Fetell Lee notes, “From an evolutionary perspective, our current habitat is still an early stage experiment.”

To address the challenges of incorporating nature into the built world, Stanford University and the University of Washington have organized the Stanford Natural Capital Project.  The universities have put together an international team to help city planners, landscape architects, and developers predict and quantify how nature and its incorporation into urban areas can improve mental health. Among other initiatives, the team is investigating how to address mental health factors when planning new public parks and how to incorporate nature considerations into software used by city planners.

With initiatives like this, we’ll be able to strengthen our connections with nature at a societal level. And with increasing awareness of all the good nature can do for our mental well-being, perhaps we can all spend more time outdoors and clear our heads.