How Time in Nature Boosts Learning in the Classroom 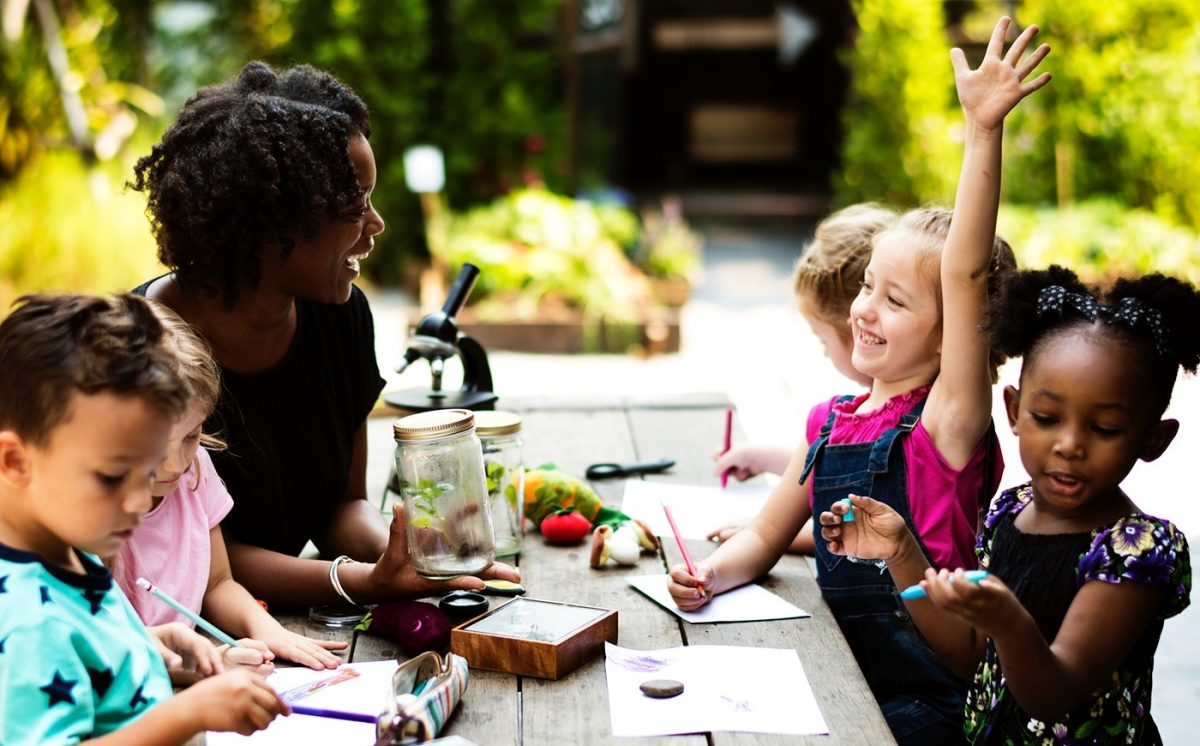 Editor’s Note:  This article was originally published on August 22, 2019.

As summer fades, you can almost hear the collective sigh of children marching back into the confines of the classroom. Hopefully, their summer vacations included healthy doses of nature. Time outdoors has noted benefits to our mental health. But kids would do well to continue communing with nature when they start hitting the books as this kind of exposure may also boost their learning.

A review article published earlier this year found that the scientific evidence strongly supports the benefits of nature exposure for learning. A large number of research studies analyzing green exposure, standardized test scores, academic grades, and other criteria show that a greater connection to nature may improve attention and self-discipline, and even enjoyment in learning.

Nature is a Vacation for the Brain

This enhancement in learning may be explained by the Attention Restoration Theory (ART). According to ART, we have two types of attention: voluntary (or directed) and involuntary.  Directed attention helps us stay focused on specific tasks. It is largely the job of the prefrontal cortex, which is commonly regarded as the seat of higher executive functions. These functions include planning, decision making, problem-solving, self-control, and overall goal-directed behavior.

Intensive work can put a strain on our directed attention. So can life in bustling cities, which requires continual vigilance and action to deal with all the street traffic, crowded sidewalks, noise, and flashing lights.

Involuntary attention, on the other hand, is drawn to stimuli that we find interesting but that doesn’t require us to take specific action. It comes into play, for example, when we take a walk in the woods or on the beach. As we stroll, various sights and sounds and other stimuli wash over us—without necessarily compelling us to do anything. This type of attention involves activity in the brain’s sensory processing regions, which process information we receive via touch, vision, hearing, smell, and taste.

When the sensory cortices take over, the hard-working prefrontal cortex gets a break. As psychologist Marc Berman and his fellow researchers write in Psychological Science, “Nature, which is filled with intriguing stimuli, modestly grabs attention in a bottom-up fashion, allowing top-down directed-attention abilities a chance to replenish.”

It seems logical that natural settings would benefit children’s minds; kids are naturally curious, and the natural world provides a bounty of targets to nurture that curiosity. “Natural environments including green spaces provide children with unique opportunities such as inciting engagement, risk-taking, discovery, creativity, mastery, and control,” notes Payam Dadvand, an environmental epidemiologist who has studied how the environment affects human development.

Dadvand led a large investigation in 2011 and 2012 which evaluated the cognitive impact of green space for more than 2,500 primary school students. The amount of green space around the students’ homes, on their commuting routes, and around their schools was measured using high-resolution satellite data. The researchers then assessed changes in the students’ working memory and attention using computerized cognitive testing.

The students exposed to more green space at home, on their commutes, and at school had greater improvements in working memory and attentiveness a year later. The amount of green space surrounding schools specifically had the strongest positive impact on memory and attention. In addition, these benefits occurred regardless of socioeconomic status, suggesting that increasing green spaces around schools could be a viable policy for improving the cognitive growth of students from economically impoverished communities.

Additional research conducted by Dadvand and colleagues revealed an association between nature exposure and differences in brain anatomy. Using high-resolution 3-D MRI brain imaging, the researchers scanned the brains of 253 primary school children and found that lifetime exposure to green space correlated with the volume of gray matter in brain regions associated with better working memory and reduced inattentiveness.

Green and Grades: A Fruitful Partnership

Of course, improved cognitive abilities are one thing. Actually improved performance in the classroom is another. Is there an association between green and grades?

A large study investigated potential associations between green space at the school site and the academic performance of 27,493 third- to tenth-graders over a nine-year period (2006–2014). For students in all grades regardless of gender or family income, higher exposure to green spaces were associated with higher English and math scores on the Massachusetts Comprehensive Assessment System.

Does green space impact certain types of students more than others? A study in 387 Toronto schools found that the academic-boosting effect of tree cover was greatest for students attending socioeconomically challenged schools.  While tree cover was associated with increased student performance on reading, writing, and math tests, students at more impoverished schools had an even larger increase.  This finding underscores the potential importance of nature as a positive influence for inner-city schools in particular.

Even A Little Nature Goes a Long Way

Getting cognitive benefits from nature may not even require going outside. In a study at the University of Michigan, students were asked to listen to sequences of digits, and then repeat them in reverse order in a classic task that measures working memory. The students performed the task before and after looking at pictures of nature or urban scenes for about ten minutes. Only the students who viewed nature scenes improved their performance on the second test. This type of finding has been largely replicated in a number of other studies as well.

Even short bursts of viewing nature out a window can measurably improve your attention. In a study involving 150 college students, viewing greenery for just 40 seconds improved sustained attention. Participants were asked to selectively respond to numbers flashed on a screen before and after viewing either a flowering meadow green roof or a bare concrete roof for 40 seconds.

There was no appreciative difference between the two groups in the first half of the task after the viewing. But in the latter half of the experiment, the group that viewed the concrete roof, made more than twice as many errors of omission than the other group. This appears to demonstrate an earlier onset of mental fatigue in the viewers denied a nature break.

Perhaps in the future, greater efforts will be made to enlist Mother Nature’s help for children with learning differences, such as attention-deficit/hyperactivity disorder (ADHD). In a large national survey, parents of children with ADHD reported significantly fewer or less severe symptoms in their children after green outdoor activities compared to activities indoors or in outside-built environments. Interestingly, this green advantage was found for families at different income levels and in those that lived in many regions of the U.S.—even in rural environments. These findings show that nature exposure could be a valuable complement to ADHD medication, or possibly an alternative for children who cannot tolerate standard pharmaceutical options.

Inside the classroom, more natural daylight has been found to improve student performance. One study involving more than 21,000 elementary school students across three states revealed impressive findings on reading and math tests.  Over one school year, students in the sunniest classrooms in one school district improved 26% faster in reading and 20% faster in math than those with the least daylight. In other school districts, scores were elevated in sunnier rooms from 7% to 18% faster.

Letting a little more nature into the classroom—by incorporating greenery, sunlight, or views outdoors—could nurture student learning in meaningful ways. Or perhaps, taking the idea one step further, and moving the classroom outside is another approach to consider. With the back-to-school season approaching, it’s essential to keep in mind one of our greatest natural resources for improving learning and our love of learning: nature itself.