One Book Baltimore: Healing a City, Page by Page 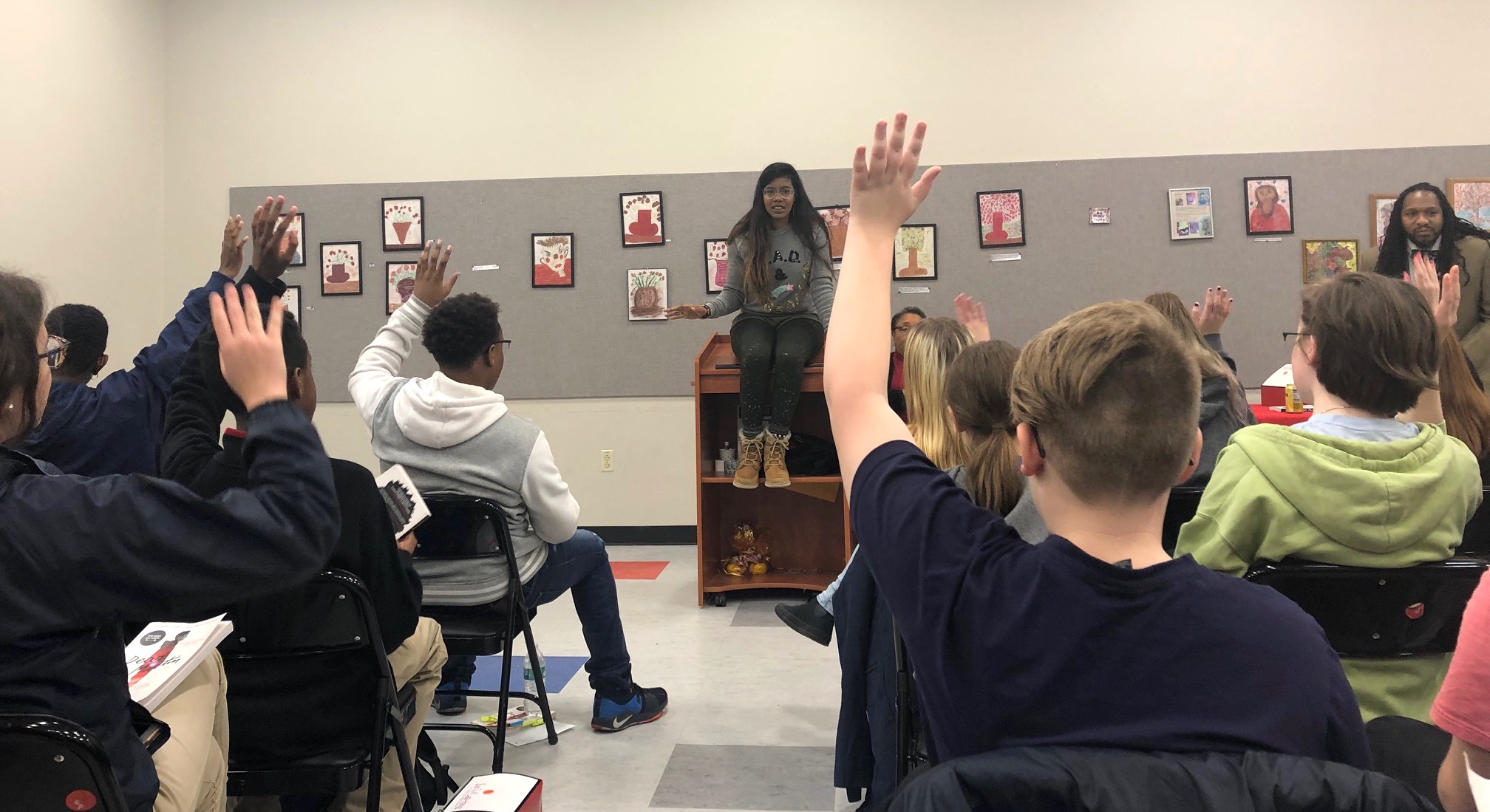 Want students to love reading? Give them a book they can relate to.

“Kids were in it from the first chapter. They didn’t want to do anything else but read,” said Tiarra Leverett, a seventh- and eighth-grade English Language Arts teacher at Hampden Elementary Middle.

Students in Baltimore City Public Schools joined the ultimate book club this fall through One Book Baltimore—a citywide initiative designed to create dialogue on important issues by reading the same book, all at the same time.

The selected book, “Dear Martin” by Nic Stone, follows Justyce McAllister through his senior year of high school. Despite being an honor student and good friend, he can’t escape the social injustice and racial profiling that plagues black youth. “Dear Martin” weaves ripped-from-the-headlines events like police brutality and non-violent protests with everyday teen experiences navigating relationships and family dynamics. In his quest to cope and find answers, Justyce writes a journal of letters to Dr. Martin Luther King, Jr., seeking guidance in his timeless teachings.

.@prattlibrary just handed me a brand new copy of Nic Stone’s first book #dearmartin as part of the #onebookbaltimore program — on a Friday, when my branch has historically been closed. #winning #atthepratt #extendedhours pic.twitter.com/sUG6oHHnvP

Organizers began talking about One Book after Freddie Gray’s death in Baltimore in 2015. Gray’s death and the resulting unrest hit city students hard—they saw injustice in the way Gray was treated and in their own treatment by police and city officials. One Book partners knew other cities had used similar literacy efforts to build community understanding and work through trauma.

It’s not just a hunch that books can bring people together; the creative arts field of bibliotherapy involves the reading of specific texts for the purpose of healing. Bibliotherapy has been shown to be an effective treatment for a variety of conditions, including anxiety, stress and substance use disorders. Readers can empathize with characters on the page while also learning factual information about their problems. Post-reading discussion or written reflections extend those benefits by offering a chance to process emotions and release trauma.

After reviewing several titles, the committee selected “Dear Martin” and provided the book to every seventh and eighth grader in the city. The City’s Enoch Pratt Free Libraries and the Maryland Book Bank had extra copies for other students, teachers and community members as well. Several high schools also joined in the effort.

With most schools recently completing the book, the author Stone visited the city for three discussion events in Baltimore last week, including one for all community members at the Northwood library branch and two additional sessions at library branches for students from five Baltimore City schools.

In each event, Stone described the connections between the book and her own life. Often the only black student in her classes, she described always feeling like she had something to prove, that people questioned her qualifications. Like the characters in the book, she had a classmate who just didn’t get it when it came to racism, but she also had a teacher who really “saw” her and understood that her racial identity wasn’t something to ignore, but to acknowledge and celebrate.

“I only met four black people in books in all of high school,” Stone remarked to students as she described male characters in classics like “Of Mice and Men,” “Huckleberry Finn” and “To Kill a Mockingbird.”

“It took me a while to get started because I didn’t see black women in books or writing books,” she said.

Now the mother of two sons, Stone said she wanted to write a book that she can hand to her own children when they start to feel the effects of racial profiling, which she considers an unfortunate eventuality for them. She also wants to add to the growing canon of books in schools that highlight diverse characters and relevant topics.

At the Waverly branch of the Enoch Pratt Free Library, students from Roland Park Elementary Middle, Hampden Elementary Middle and the Academy for College and Career Excellence (ACCE) arrived clutching their books, pages flagged with bright stickers, and carrying pages of handwritten questions for Stone. Throughout the one-hour session, eager hands shot up with questions.

Students asked Stone where the events and people in the book come from. They wanted to know, were they real?

Stone told the students that she based a pivotal scene in the book on the 2012 death of Jordan Davis, a 17-year-old in Jacksonville, Fla., killed after an altercation with an older white man over loud music.
The similar fate of Justyce’s best friend in the book hit students hard.

“I felt it in my heart,” said Justice, a senior at ACCE. “Everyone has a best friend who’s with them everywhere.”

“The most surprising part about reading this book as a school is that we all felt the same way about it,” she said. “Everyone thought that what happened was wrong.”

When asked by students why she included such a sad event, Stone said, “Sometimes it takes a tragedy for people to realize there’s a problem.”

Leverett said it was those real-life events that made reading the book together so powerful.

“It allows us to have a conversation with students that we can’t typically have,” she said. “A lot of more of them have experienced issues of police brutality than I would have ever imagined. I’m amazed by the things I was able to learn about them and how they see the world, just by reading this book together. It’s important for us as teachers to make more time to talk about things that are relevant to them.”

Stone’s down-to-earth nature (she sat on top of the podium instead of standing behind it) makes her accessible to youth, but it’s clear she has high expectations for her young readers. She was direct about her goals for the book.

“If there’s something in the text that bothers you, dig deeper. Find out where it comes from in history,” she said.

Stone discussed references to the Loving v. Virginia Supreme Court case that ultimately led to the legalization of interracial marriage and to the recent Black Lives Matter movement as examples.

When asked what she wants readers to take away from the book, she said, without missing a beat, “No matter what anyone thinks of your or says about you—you decide who you are and what you believe about yourself.”

Judging by the students’ audible gasp when Stone revealed a forthcoming book sequel, “Dear Justyce,” it’s safe to say she has the students’ attention and the opportunity to continue to encourage them through her stories.

When you catch a student reading at the exact moment that a major event happens in the book…@getnicced #umreads #DearMartin pic.twitter.com/Z7TyhmkZ2D

She closed with a final challenge to students, reminding them that Dr. King was just 17 years old the first time a newspaper published a letter he wrote.

“Use your words, art and music to draw attention to things in society that you don’t like,” she said. “You can think for yourself. Use that.”

As a One Book partner, IAM Lab will evaluate the initiative through retrospective surveys of students, teachers and other community members to understand if this citywide effort is associated with improved social and emotional wellbeing and school and community cohesion. Results of those surveys are forthcoming.