Dialog Series: How Creative Forces Work Together to Heal the Military Using the Arts 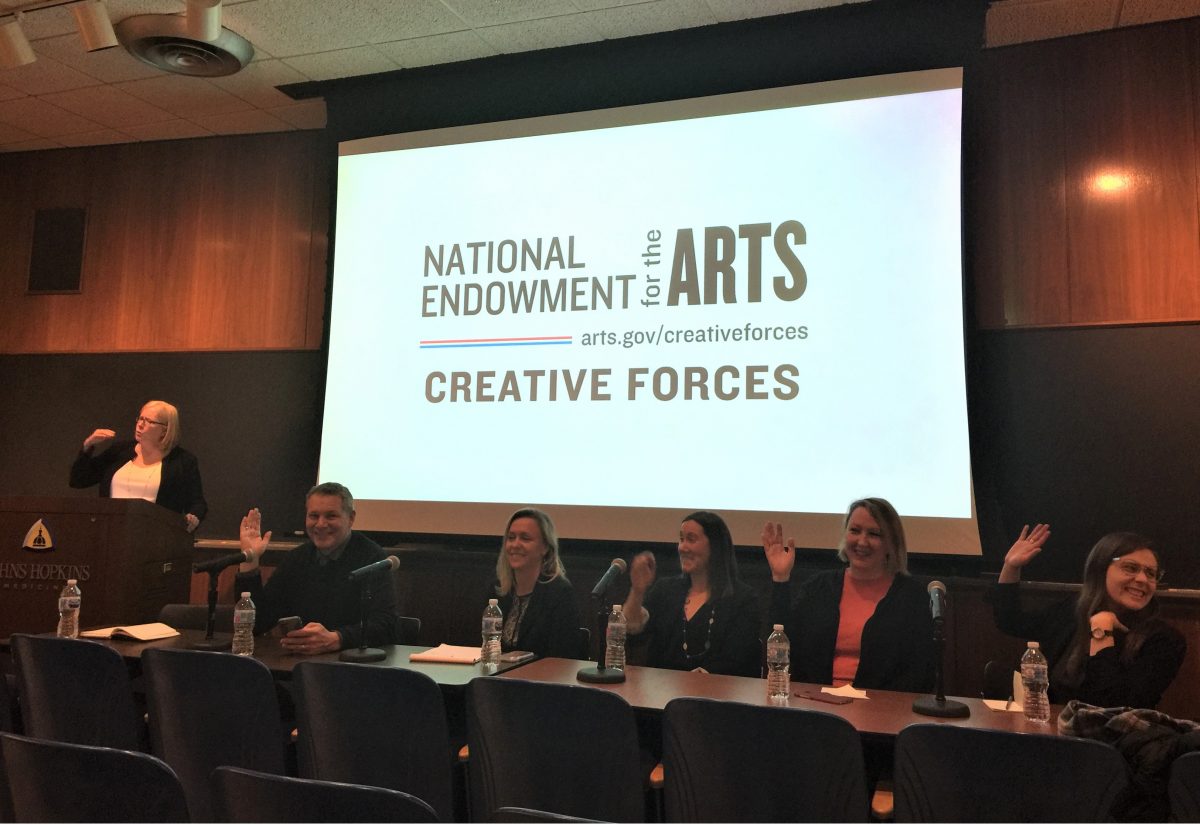 Following an improvised explosive device detonation during a military mission, Captain Luis Avila was left paralyzed and unable to speak.  With intensive physical therapy, occupational therapy, speech therapy, and music therapy, Avila began his recovery. The music therapy provided by the Creative Forces program proved to be an essential rehabilitation tool and helped Avila regain his ability to speak and keep his spirits up.

As his wife, Claudia Avila, says in a video for Creative Forces, “we don’t see the disability; we only see the possibility.”

Creative Forces is an initiative of the National Endowment for the Arts (NEA) in partnership with the US Defense Department and Veterans Affairs. “We look at using the arts to help in healing servicemen and women who have experienced the invisible wounds of war or traumatic brain injury or post-traumatic stress,” said Captain Sara Kass, a doctor who serves as the Senior Military and Medical Advisor for the organization.

Kass moderated the discussion of an interdisciplinary panel of experts at Creative Forces – researchers, clinicians, and policymakers – who highlighted the opportunities and challenges of providing clinical care tailored to the military community and producing the best research evidence possible.

“We want to think about the entire military and veteran population that has been affected by military service, understand what those needs are, and respond to them,” said Director of Creative Forces and Senior Advisor for Innovation at the NEA, Bill O’Brien.  “So it’s really important to understand your target population, assess what their needs are, organize a response, and track whether or not that response had the effect you thought it did.”

The Art of Healing from War

Creative Forces began when Kass’ team realized how effective the creative arts therapies were for the patients at National Intrepid Center of Excellence (NICoE) of Walter Reed National Military Medical Center.  “It was one of the top things they wanted to continue when they left the [treatment facility],” Kass said. Unfortunately, at the time there was no way to continue these therapies once the patients left a clinical setting.

With funding from the NEA, DoD, and Veterans Affairs, Creative Forces has now expanded to 11 clinical sites across the country, plus a telehealth program to provide creative arts activities for service members, veterans, and their families and caregivers.  These activities include music, creative writing, and art.

Dance therapy is another treatment that veterans and their loved ones might receive.  Movement is “our first language,” said Liz Freeman, a dance movement therapist based at the NICoE.  “Dance movement therapy is a psychotherapeutic use of movement to help integrate the cognitive, emotional, social aspects of an individual, to help and improve health and wellbeing.”

Freeman works with active-duty servicemembers with lengthy, frequent deployments which leads to a constantly shifting dynamic for a family unit.  To demonstrate one intervention, Freeman asked the audience to participate in a “mirroring” exercise she uses for couples where each person is assigned the role of either leader or follower.

Finally, the third part of the exercise is “the fun part where individuals are trying to both lead and follow simultaneously, so similar to being in dialogue,” she said.  “It’s trying to initiate movement but also follow the movement of the other person, so it’s creating some shared action.” This experiential activity helps military couples “using movement as a metaphor to look at how to improve communication in a relationship.”

The power of these types of therapies lies in “using the arts practice as an intervention to explore the self.  It’s process versus product,” said Melissa Walker, the lead art therapist for Creative Forces and Healing Arts Program Coordinator at NICoE.  “The ability to express themselves and open up about these things that they haven’t necessarily discussed.”

The creative arts help the veterans become active engagers instead of just passive recipients, Walker said. Through engagement and development of confidence and mastery in the arts, veterans then become more engaged in their own care.

To Advance Creative Arts Research, “It Takes a Village”

For all the benefits veterans and their caretakers say they’re getting from creative arts therapies, there is still a need for more refined and robust research.  “You have to have the evidence that backs it up,” Kass said. “If you don’t back it up with evidence, it doesn’t stay.”

Chandler Rhodes, a neuroscientist at NICoE, and Donna Betts, the Clinical Research Advisor for Creative Forces are working together with therapists to figure out how art therapies affect the brain in order to improve targeted therapies in the future.  “Research is absolutely essential to not only advancing any discipline, especially a burgeoning discipline, but also to increase viability and ultimately to increase access to care,” said Betts.

In 2018, Creative Forces released their Five-Year Clinical Research Strategic Framework prioritizing research areas in developing conceptual frameworks for each type of therapy, including art therapy, dance/movement therapy, drama therapy, and music therapy.  The Framework also lays out plans for better understanding the effects of integrating these therapies with medical and rehabilitation services and developing effective measures for key patient characteristics.  “There are huge gaps” in creative arts research, Betts said.

The research is inherently collaborative and interdisciplinary, said Hannah Blumenfeld, Creative Forces’ Community Connections Project Manager. “We are all working towards similar goals… To me there is a real opportunity with this project to more generally help us in the arts community to put frameworks around that benefit.  Something we talk a lot about on this team is what are the impacts and for whom?”

Walker agreed, saying that the work Creative Forces does require “people with different languages than I have.  When we can share our languages, we come up with something pretty impactful.  It can’t be a one-person show. It takes a village.”

You can watch a livestream of the event here.

About The Dialog Series

The monthly Dialog Series at the International Arts + Mind Lab invites today’s thought leaders from the arts, sciences, and technology to share their unique lens on how the arts are essential to our health, well-being, and learning.  You can read about our previous Dialog Series featuring Jill Sonke and her State of the Union on the field of Arts in Health.