As we inch closer to Election Day 2020 in the United States and the COVID-19 pandemic makes voting in person a risky endeavor, today’s visual artists are galvanizing people across the country to cast their ballots. During the last presidential election, in 2016, nearly half of the voting-age population in the US didn’t vote. This year, the uptick in coronavirus cases, confusion about mail-in ballots, differences among state voting regulations, and allegations of voter suppression could make voter turnout even more dismal.

How can the arts help, and what are visual artists doing to get out the vote?

Printed artwork has been a part of political communication since the advent of the printing press, but took a backseat to television as the preferred medium in recent decades. This changed when the 2008 Obama campaign invested heavily in its visual design and branding, and inspired graphic artists to create their own political art, like Shepard Fairey‘s iconic HOPE poster.  The resulting campaign artwork won marketing accolades and made the visual arts hip once more in the political sphere, especially among younger voters.  Thanks to the speed and reach of the internet and social media, these images can quickly go viral in days, if not minutes, and spread to larger audiences than reached even by television. 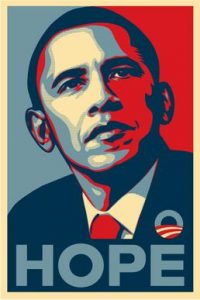 “Once you see something, you can never unsee it,” says Cleo Barnett, the executive director of Amplifier, a design lab that commissions artists, including Shepard Fairey, to create art that gives voice to grassroots movements. “For this reason, art has the ability to pass into a person’s conscious and unconscious—and linger for a long, long time.”

Guiding Voters Through the Process

Compared to other developed countries, the United States has one of the lowest voter turnout rates in the world. But it’s not just a matter of apathy—it’s the complicated, inconvenient setup that can make voting unappealing, experts say. Add COVID-19 to the mix, and voting becomes even trickier, requiring a need to take precautions and plan ahead.  That’s why Vote.org unveiled a new initiative in 2020, Plan Your Vote, which calls on artists to use their creativity to prompt would-be voters to formulate a plan.

Recent research meta-analyses have shown that encouraging people to vote works in direct mail and other get-out-the-vote campaigns, with lessons that may be transferable to other graphic media like posters, billboards, yard signs and social media graphics.

Several world-renowned artists heeded Vote.org’s call, from Jenny Holzer and the Guerilla Girls to Julie Mehretu and Wangechi Mutu, submitting visuals that anyone can download and distribute, as long as they credit the artist and PlanYourVote.org. 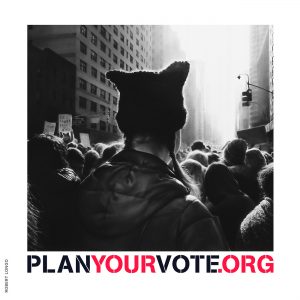 Filmmaker and photographer Robert Longo created a black-and-white photograph of a woman in braids, wearing the tell-tale pussyhat from the 2017 Women’s March. Viewers see the woman and throngs of people surrounding her from behind, as sunlight pours through downtown buildings in the distance, offering what looks like a ray of hope.

Conceptual artist Hank Willis Thomas turned to reverse psychology, photographing a truck with a sign reading, “NOT VOTING IS ACTUALLY VOTING,” while Dyami White Hawk featured a native American woman with downcast eyes, donning a black shirt with white letters that say, “MORE THAN A MASCOT.” 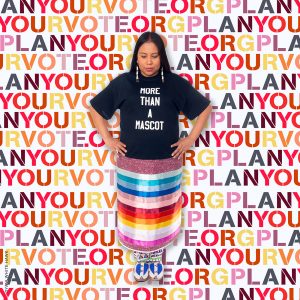 With the web address PlanYourVote.org inscribed on every image, viewers can visit the site for step-by-step instructions:

“Today you should: Register if you haven’t already. Verify your registration if you have any doubt. Check your absentee status if you aren’t sure. Set a reminder in case you forget.”

In honor of this year’s 100th anniversary of the 19th Amendment, which gave women the right to vote in the US, the American Institute of Graphic Arts (AIGA) launched Get Out the Vote: Empowering the Women’s Vote. This new campaign calls on designers to create original, nonpartisan posters for anyone to print, at no cost, and distribute to the public. 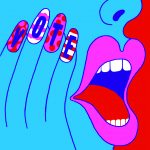 In “Your Vote Is Your Voice,” New York designer Melinda Beck infuses pink and pale blue into the patriotic red, white, and blue palate. A woman’s long, perfectly shaped nails—acrylics, perhaps—display the painted message, “VOTE,” while her pink, voluptuous lips part, as though to speak, or voice, her ideas.

Karen Cheng, a designer from Seattle, delves into the history of confining roles for women in a poster titled “Babe, Broad, Bitch/Mrs. Ms. Miss.” Set in white against a red backdrop are traditional, and sometimes derogatory, female roles like granny, abuela, chica, diva, ma’am, madam. In black at the bottom, an assortment of more liberating terms—human, voter, citizen, participant, American—stand in stark contrast to those up top. 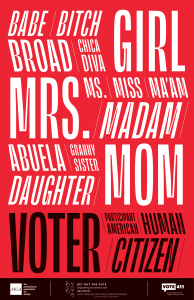 “A century ago, women were primarily seen as wives and mothers,” Cheng writes in her artist statement. “They were caretakers of the home, while men went out into the world of work.”

“One hundred years later, women have far more choices,” Cheng continues. “We can earn wages (although less than men), and we can (with much effort) pursue ambitions in public and private spheres. This change in the roles and expectations for women was greatly advanced when women fought for and won the right to vote.”

By calling on artists to create these eye-catching posters, the campaign seeks to remind women to exercise their hard-earned right to vote and continue the progress that’s been made over the past century.

The week of October 26, Amplifier will launch its first-ever app, available on Android and iPhone platforms, to put activist art in the palms of people everywhere, where they can share images on social media or download, display, and even project images, for free. Among the first artwork available through the app is Amplifier’s new series, Voting in Solidarity, which focuses on black liberation, indigenous sovereignty, and the connections that unite different groups of marginalized people.

A design by artist Mer Young, who is Hidalgo Otomí and Mescalero-Chiricahua Apache, features the Arapaho woman and reputed war chief Pretty Nose alongside the political activist Angela Davis. Portraits of the two women situated alongside each other are superimposed on a landscape of mountains and rock formations, icons of the American West.

All of our artwork is available for FREE high resolution download for you to share with your community! Help get involved with our efforts to build community and get out the vote by putting the artwork up in your community! Link in bio! Comment below the reasons that are driving you to the polls this November for a chance to WIN A FREE POSTER PACK! Free poster pack has been given away! Artwork by @solacilike for @newflmajority

Three women with various brown skin tones and hair and makeup colors adorn a design by Laci Jordan, with the words VOTE FOR OUR LIVES imprinted across the top. The design is part of a three-panel series depicted on a billboard in Florida, created in partnership with New Florida Majority, an organization working to increase the political power of Florida’s black and brown communities. “With all of the events that have happened this year, including millions of protestors showing up in the streets around the world demanding justice for Black Lives, it is critical that we elect representatives that will allow us to continue to care for our communities through organizing, mutual aid, and civic engagement, including the right to protest,” reads a post from Amplifier on Instagram, showcasing Jordan’s design.

As Amplifier, Plan Your Vote, and other organizations work to circulate messages and images in the weeks before the election, they encourage people everywhere to download, post, and share their originally-designed art. “We’re giving you the tools to participate in democracy and calling on the country to download our artwork and put it in a public space or even your home,” Barnett says. “Together, we can reclaim our culture and get civic engagement in the collective consciousness.”